“You carried a local delicacy each time in your bag, some small chosen gift, a stone, an apple, flowers, a photograph, transported hundreds of miles, as if you could bring a bit of your earth to me with each meeting; as if, over the months, you would bring your place to mine, one handful at a time”

In magic there are two, now neglected, visions of space. One is the idea that things carry there origins with them as they journey – the principle of contiguity. That by being somewhere in particular, or next to something, if attains powers that stay with it as it moves. Something of place moves, is dislocated, but links an arrival to a departure. The other is the principle of mimetic sympathy –the idea that similar arrangement or appearance can act over a distance to affect the space it mimics. Both of these are present in a voodoo doll. The doll looks like the person it can affect from a distance. It also often includes bits to that person – a hair perhaps. 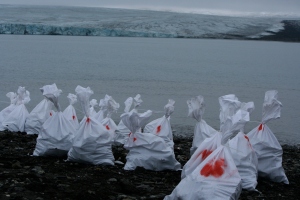 Both of these principles are present in the project of Nowhereisland. We dug up six tonnes of rock, gravel and sand and placed them in white plastic sacks marked with coloured aerosol dots – red, blue, yellow – to distinguish the size of their contents. The beach of Nyskjaeret looked like a work of art as we dug and hauled, our back aching. These bags were unloaded from our red schooner and are being transported to Britain where Alex Hartley will use his magic to turn material into an island – a smaller version of Nyskjaeret, which will travel around the coast of southwest England during the Olympics. The sculpture will look like Nyskjaeret and will consist of material from Nyskjaeret. It will carry Nyskjaeret with it along with its tales of changing earth. 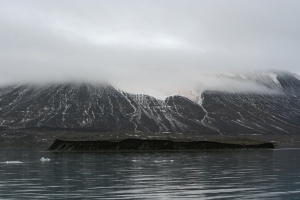 I have been on the trip of a lifetime. Several months ago I was approached by Claire Doherty, a producer/curator from Situations in Bristol, and the artist Alex Hartley to accompany them and 15 other expeditionaries to the High Arctic Archipelago of Svalbard. In 2004, as part of a Cape Farewell expedition Alex had discovered  new island, not on any charts, that had recently been revealed by retreating ice. He became the first person to set foot on this island. Ever.

Alex had recently been awarded a grant to return to the island, remove 6 tonnes of rocks and gravel, sail it out into international waters, declare it a new nation, and bring it back to the UK to make a sculpture of the island that will float around the southwest coast of the UK during the Olympics. It will be an official Olympic artwork. Anyway, he wanted a bunch of “bright minds” to accompany him on the lovely red sailing boat, the Noorderlicht and I was to be one of them. 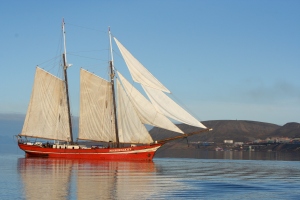 I was accompanied by (in addition to Claire and Alex), Alex’s partner Tania Kovats (also a totally wonderful artist and observer of the natural world), Frank, their 12 year old son with whom I made a map of the muddy island (proper geography was everywhere on this trip – maps, mountains and exploration!), Laurie Penny, feminist rebel rouser, journalist and blogger extraordinaire, Tamsin Omond – full time activist with Climate Rush and, it turns out performance poet, Carl Gardner, a Barrister and legal blogger and all round expert on matters constitutional, Sam Thompson – expert on happiness and player of the penny whistle (celtic jigs just sound better on a sailing boat), Keiron Kirkland – gentleman and magician and educationalist for the 21st Century, Stephen Pax Leonard – a linguist and anthropologist who, in solid traditional fashion, had just returned from a year living with Polar eskimos of Greenland, David Bickerstaff – artist/filmmaker and dancer (we discovered), Max McClure – the official photographer and walking advertisement for Rab clothing, and Kim Tilbrook – an educator who will be the ambassador for Nowhereisland when it reaches Devon. Also accompanying us were two A level students, bloggers and performers of one armed push-ups, Charlie Logan and Lydia Maloney. Oh – yes – and the BBC in the person of Johnny Rutherford were also tracking our every move. (Meet them all here – http://nowhereisland.org/journey/expedition-team/)

Our job was to theorise the island/nation/artwork as it was happening, to use it as space to think about the possibilities of filling this blank space with meaning and intent and, in doing so, avoid the mistakes the community of actual nations. So – over the next week or so I will convey some of the thoughts I had while on that trip and since. Meanwhile – become a citizen and sign up at Nowhereisland.org.